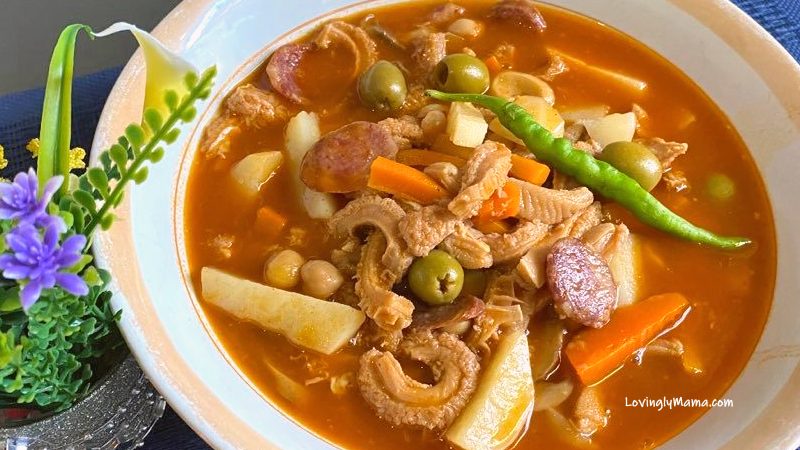 The quote, “the way to a man’s heart is through his stomach,” has been written, said, and heard over and over again. But, it’s so true between hubby and I. That’s why when we started blogging, we were known as the Mama Cooks, Papa Eats couple. This Pinoy Callos Recipe came from my own kitchen because this is the taste that hubby loves. And he would proudly boast that my callos is so much better that those in restaurants (he’s exag, but let him be proud of his wife, ‘kay?)

Why the Fusion Sounding Callos

Well, callos is a classic Spanish dish served among families and even in restaurants. It is made primarily with tripe and colored with paprika. In my case, I would normally use tomato sauce. There was one time that I cooked callos using just Spanish paprika as coloring and hubby didn’t like it so much. He said it was flavorful but he was looking for the callos taste that I usually make. So I am back to my old style of making this dish.

Fast forward to now, the community quarantine for Covid-19 has made me more productive in the kitchen. On normal days, I usually cover events, write, and take care of the kids. Since we no longer travel and cover events outside the home, I busied myself in the kitchen, to the delight of the hubby and the kids. I guess the psyche here is, we may be stuck due to home quarantine. Why not get stuck with good food, eh?  At least our tummies are full and our hearts are glad.

I was able to stock up on frozen tripe that I got from Robinsons Supermarket before the lockdown was declared in Bacolod City. And then I discovered that my mother in law has a brand new, unused pressure cooker. So I made callos. Many people asked if they could try it or if I could share the recipe.

Since I don’t sell, I offered it up for barter and was happy with the things I got. Mother-in-law was happy, too. And the most important thing is, we made so many families happy with my homemade callos.

I call this Pinoy callos because it has tomato sauce as well as paprika. And since I am a homecook, I am not afraid to use flavorings in order to achieve my hubby’s desired taste. So without any more backstories, here is my Pinoy Callos Recipe.

What You Need: Pressure Cooker

Why do you need a pressure cooker? To make the tripe tender, it would take at least 3 hours of active boiling with tenderizer to get the tenderness we like. We no longer have the time to do that in the present. The pressure cooker also saves us on gas, since I don’t want to cook on charcoal.

Cooking Tip:
Despite the recipe I have shared here, much of what I do is really tikim ng tikim. Yes, I keep tasting my dish while cooking. But for the final part, I let my husband taste it. If he is not happy with it, I try to adjust the seasonings. For example, he tells me, “it lacks kick.” I just have to decipher his description and translate it into the missing flavors. Yeah, when it comes to food, he talks in code. Haha

Wash the tripe with water. I buy the blanched trip in the supermarket because it’s already pre-cleaned. Honestly, I don’t want to clean tripe from scratch, though you can get it cheaper this way.

Please remove the sebo (tallow) at this point. Discard this fat because it will ruin your dish. Sebo can be a real deal-breaker.

In a large pot, bring water to a boil. Add lots of salt, ginger slices, and laurel leaves. Boil the tripe for about 10-15 minutes. Remove the tripe from heat and discard the water.

When the tripe is cool enough to handle, slice them into strips that are about as long and wide as a regular pinky finger. Set aside.

Heat oil in the pressure cooker. Saute the garlic and onions and stir fry for about a minute. Add the ginger and then the tripe. Add a little salt and mix. However, it is going to be hard to stir for big batches.

Add water to about the same level as the meat. Drop in the beef cubes and mix in the paprika, cayenne pepper, black pepper, laurel leaves, and red bell pepper. Stir in the honey or syrup, Sprite, and cooking wine. So basically, you dump everything.

Bring this to a boil and pour in about 2/3 of the tomato and chili. Mix and bring to a boil. Taste it. If the seasoning is enough, cover the cooker, and pressure cook for 20 minutes.

When all the pressure has been released from the cooker, you can already safely open the lid. You will be greeted with a casserole full of yellow orange-tinted tripe stew that’s oh-so-tender! But the callos is not ready yet.

Heat the cooker again and bring your tripe stew to a boil. You may want to transfer the tripe to another casserole but I find that too inconvenient. So I just continue cooking in the pressure cooker. To hasten the boiling, you may put the lid back on loosely (do not lock).

When the stew has boiled again, add the carrots. Cook for about 3-5 minutes then add the potatoes. Mix and let it boil for another 7 minutes or until the potatoes are tender.

Stir in the mushrooms, olives, and the fried chorizo. Adjust the seasonings as well as the tomato sauce at this point.

For the last batch that I made, hubby looked for the “kick.” I agreed that the dish need oomph and so I added Tabasco, about 2 Tbsps. And that was enough to give the dish its needed “kick”. Haha

When serving, remove the laurel leaves and ginger slices. This will keep people from mistaking ginger from tripe and accidentally chewing on it. It can be annoying, I tell you.

Serve hot. It is best paired with steamed white rice or sliced baguettes.

So again, taste your dish as you cook until you achieve the flavor you desire, especially in terms of sweetness, sourness, spiciness, or “kick”. This Pinoy callos recipe is just a guide for you.

Cooking Tip:
Since callos is quite tedious to make, I cook a big batch and then divide them into serving portions. I then place them in the freezer and take them out when we are ready to eat callos again.

Meanwhile here are other homecooking recipes in this blog. Just click on any of the links below.

During the quarantine, I developed some budget meals from sardines to help cope with the crisis. Do share them with others who need to stretch their budget, too. Here are the recipes:

Mommy Sigrid – Bacolod Blogger
Sigrid is a WAHM and Bacolod mommy blogger, taking care of kids, homeschooling, covering events, designing, traveling, and blogging. After finishing Mass Communications from University of St. La Salle, she became a newswriter and then pursued a career in advertising as copywriter and graphics designer. Eventually, she became a freelance writer for national and international publications. She was a contributing food writer to COOK Magazine before she became a Bacolod mommy blogger.

Lovingly Mama– Bacolod mommy blogger – This parenting and family blog accepts product features, sponsorships, blog collaborations, monthly advertising, and paid posting. If you would like to be featured or to advertise here, please email Sigrid Lo at sigroid75@gmail.com