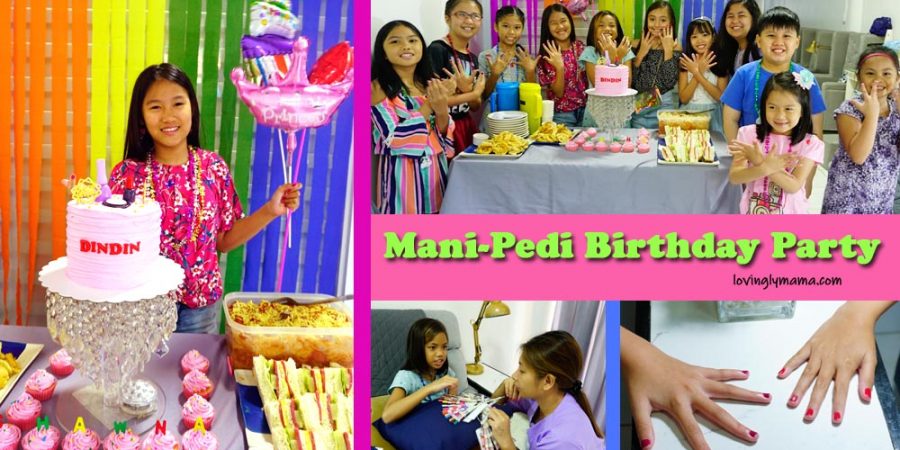 Our eldest Shawna is turning 11 years old already! She is now officially a pre-teen. Time really flies at warp speed! And this year, she opted to spend time with her homeschooling friends over a mani-pedi birthday party. Here’s how it went.

Birthday Traditions in the Family

Our family has established birthday traditions for the kids. They each get a a birthday party with invited family and friends on their first and seventh birthdays. Otherwise, it’s usually just celebrated with the family and the birthday girl just gets a cake.

On the 8th year, it’s a birthday outreach at a chosen orphanage. When Shawna turned 8, we celebrated this milestone at the Home of Hope Orphanage in Brgy. Handumanan, Bacolod City.

For her 9th and 10th, Shawna opted for travel. Her 9th birthday was spent on a Baguio City Birthday Adventure for Kids. It was a week-long adventure with different learning experiences along the way. A notable time was meeting national artist Ben Cabrera at the BenCab Museum.

Meanwhile, her 10th birthday was spent frolicking on the beach as Mermaids in Boracay. We stayed at the Savoy Hotel Boracay for this beach birthday experience, thanks to Megaworld Corporation.

After some time, it can be tiring to live out of your suitcase. Last week alone, we went out three times. We had an overnight stay in a Seda Capitol Central premier room. Then we went on a picnic with the Bacolod Homeschoolers for the National Homeschooling Day. Finally, we checked in for an overnight stay at Baluarte Rest and Relaxation Resort.

Thankfully, Shawna has chosen to spend time with her homeschooling and childhood friends for a mani-pedi birthday party. It was easy to manage and prepare.

Shawna has the most awesome girlfriends! They showered her with gifts that she really likes. Without asking, they really know what she would like. She got cologne, perfume, an elegant top, hand cream, pouches, books, accessories, lip tint, and a manicure set! Hooray for new nail polish colors. 🙂

Meanwhile, her sister Shane picked out a two-piece swimsuit (not bikini). We went to the SM Store together and she chose a pretty two-tone Coco Cabana swimwear.

Lastly, another friend gave her money gift like the ang pow, which made Shawna happy because she added it to our Legacy Land savings. That’s our family goal that the four of us are working on.

These kids, who are almost about the same age, didn’t need a lot of preparations anymore. No more lootbags and the food was simple. We had homecooked birthday spaghetti and some snacks items ordered from Bacolod Cupcake Cafe.

They were already happy with the birthday bead necklace for each one of them. I got them at Hannah’s Party Supplies at the ground floor of Ayala Malls Capitol Central.

What was important for them were the nail treatments as well as the chika they had.

There was a TV set at the salon and I asked if the kids could watch TV. They could not be served at the same time because the ratio of nail technicians is not 1:1. Thankfully, they had internet so the kids were able to choose a show. I asked if they wanted to watch a princess movie, one answered: “Princesses? What are we 5?” hahaha

Oh my gosh! How their tastes have evolved!

Venue of the Mani-Pedi Birthday Party

We held the mani-pedi birthday party at Aima Beauty Shop, a nice and modern Bacolod nail salon. It is located at MGB Building, Hilado Street, Shopping (across Hua Ming), Bacolod City. Tel. No. 700-8872.

We rented the placed for P3000 (actual price is P3,500) and it’s exclusive for 2 hours. The amount is consummable in services. They allowed us a discount because these are kids and don’t take too much effort to work on their nails.

Our party food was prepared by Bacolod Cupcake Cafe, which is located next door to Aima Beauty Shop.

We ordered clubhouse sandwich, onion rings, as well as cheese with bacon sticks. They also prepared pitchers of iced tea for our drinks. The birthday spaghetti was made by our cook.

As per Shawna’s request, we ordered pink strawberry cake and cupcakes by our friend, Jireh Poquita. Find her on Facebook, click this link: JJC Nutritreats.

She is also the maker of the Bacolod ube pandesal that was featured by GMA travel host, Drew Arellano.

We didn’t really have a lot of time to deorate the place because Aima Beauty Shop only allowed us two whole hours, including set up.

But in order to have some vivid accents in the photos, I bought crepe paper in five colors and we just hang them on their divider. It became a nice and colorful backdrop. We didn’t need a lot of balloons anymore. We just bought a couple of foil balloons from Hannah’s Party Favors. That was it!

The gathering was simple but everyone was happy because they liked the treat. That’s what matters most. 🙂

Activities for Kids During Home Quarantine for Covid-19
Tips on How to be a Responsible and Environmentally-Conscious Traveler
DIY Maternity Photo Shoot: Styling and Fashion Tips from Filipino Moms
The ShoeBox Project Bacolod | Sharing Hope and Love
Digital Thumbprint Program Helps Kids Fight Online Verbal Abuse
Healthy Options Collagen Complete: My Secret to Beauty from Within
Spread the love

Mommy Sigrid – Bacolod Blogger
Sigrid is a WAHM and Bacolod mommy blogger, taking care of kids, homeschooling, covering events, designing, traveling, and blogging. After finishing Mass Communications from University of St. La Salle, she became a newswriter and then pursued a career in advertising as copywriter and graphics designer. Eventually, she became a freelance writer for national and international publications. She was a contributing food writer to COOK Magazine before she became a Bacolod mommy blogger.

Lovingly Mama– Bacolod mommy blogger – This parenting and family blog accepts product features, sponsorships, blog collaborations, monthly advertising, and paid posting. If you would like to be featured or to advertise here, please email Sigrid Lo at sigroid75@gmail.com